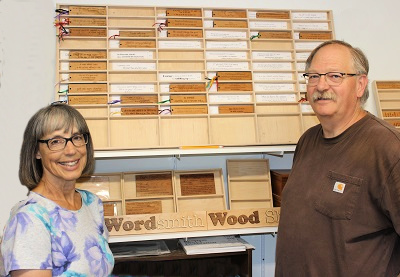 Loveland area couple Gib and Lisa Coalwell made a few wooden boxes decorated with sayings but a large order put a toll on their small laser engraver.

“At that point, we realized this is getting bigger than us,” Gib said.

“The one thing about the LBDC and the SBDC, no matter what we need next, they have it,” Lisa said.

The Coalwells originally didn’t plan to own a business but circumstances led them to combine Gib’s hobby with Lisa’s word-based career. Gib worked for 25 years in chemical manufacturing, and Lisa taught for nearly 20 years in Thompson School District, plus worked as an education reporter and freelance writer.

In 2001, Gib’s job ended with a company closure. He got a practical job but also acknowledged his love of woodwork after seeing a local artist at a craft show. He participated in his first craft show in 2001, launching Orion’s Woods named after his and Lisa’s view of the stars.

Gib started with custom-order boxes, selling them at shows, and then in 2011, a repeat customer wanted an engraved wedding gift. He hired out a laser engraver, and at Lisa’s suggestion bought one in 2012. They began engraving boxes for customers, but a year later, Lisa noticed the engraver often sat idle and suggested bookmarks with sayings to create a product supply.

“We always say it’s peanut butter and jelly that go together, Gib and Lisa and words and wood,” Lisa said.

In 2013, the Coalwells started an Etsy Marketplace online store, and with advice from the LBDC, rebranded as Wordsmith Gifts. They later became Wordsmith Wood Shop for an even better fit for their special event and location mementoes, logo branding and clever sayings and designs.

“We mix words and we mix wood. That’s what we’re at today,” Gib said.

In April 2016, the Coalwells went on a trip to Texas and stopped at a major retailer to drop off samples, receiving a large purchase order for 5,000 bookmarks. A year later, they added a second major retailer, plus started making ornaments and recipe cards, and their sales numbers doubled. Adding magnets in 2018 again resulted in another doubling of sales.

By then, the Coalwells realized they needed staff and met with Nikki Larcher, an SBDC consultant, to learn about human resources and now have five employees. They see other consultants, such as Mike O’Connell about business planning, Franklin Taggart about marketing and Amy Alcorn about social media. They also enrolled in the Small Manufacturer’s AdvantEDGE program and in April received a $6,000 scholarship. They meet with Jonathon Jaggers, a manufacturing consultant, for intensive training to develop a business plan and optimize their manufacturing processes, productivity and financial results.

“Their partnership is a blend of creative skills and excellent customer service,” Jaggers said. “They are responsive in filling their customers’ needs and requests.”

Jimena Peck is a native of Argentina, who has built a vibrant photography business.   “I do mostly editorial work that helps tell a story. I also do food photography and portraits. My style is clean, simple, and especially features natural light. I sometimes travel to remote sites for the project.”

After earning a Journalism degree in Argentina, she moved to Holland and began doing photo shoots for the digital marketing platform of a specialized shopkeepers association.  She moved to Fort Collins in 2015 and expanded her freelance business.  In early 2018, she had built up her client portfolio enough to go full-time!

As a former model, Jimena experienced and witnessed many aspects of the photography industry.   “ I traveled internationally a lot, and was often language-limited, so I started doing photography to communicate”.

Jimena was hiking with a friend who told her about the SBDC.    Jimena met  with SBDC Creative consultant Jennifer Spencer.   “Jennifer is always helping out. She helped me with self-confidence and developing my skills. She helped with pricing and managing accounts.”   She(Jimena) also met with Amy Alcorn, SBDC social media specialist.  “Amy helped me with the text on my website. I’ve worked two years on my SEO, because “being found” is my most important goal.”

Jimena has set up her LLC, and plans to implement QuickBooks software in 2019.

The Larimer SBDC offers specialized classes and consultants to our Creative clients like Jimena, who add so much to our communities.  “I wasn’t considering myself as a business.  The SBDC gives you the option of talking to someone who understands your situation, and what you need.”